The Bloodless Revolution: A Cultural History of Vegetarianism: From 1600 to Modern Times
Tristram Stuart

Review: The Madness Underneath Sequel to The Name of the Star, which was my favorite YA book of 2012 and (surprisingly) totally held up for me when I reread it, prior to the release of this. TMU carries forward a lot of what was enjoyable about its predecessor, but it doesn't stand on its own nearly as well. NOTS did a fantastic job of building to a satisfying resolution through spooky twists and turns, while *still* setting up a foundation for a jaw-dropping cliffhanger. In comparison, TMU reads as exposition: it presumably sets up the third novel, but it's far less satisfying on its own than I hope that novel will be.

Review: The Name of this Book is Secret My girlfriend, Melissa, & I are reading these aloud. I like the way they're told (silly footnotes, random tangents, lots of games and interruptions) better than the stories themselves. But between the narrative style and the characters (Max-Ernest especially), it's been easy to keep reading. My girlfriend, Melissa, and I read this one aloud, together. JK Rowling does a masterful job of creating intricate worlds populated by layered, believable people. This one never seemed to move beyond that toward any real purpose or meaning.

Melissa, after the final page: "I'm not satisfied."

Yeah. That about sums it up. This book is everything I love in a book: it's completely engrossing. It's true while playing with "truth" and real while bizarrely magical. It challenges your ideas about what it means to tell a story, and who can tell it, and how it can be told. It's thoroughly quotable but mocks its own philosophy and symbolism. It's sad and triumphant and why are you still reading this review when you could be reading it? Oh holy hell, this book. 5/5 stars is not a rating I give lightly, especially to romances (which I continue, in spite of myself, to try and like less than I do). I borrow my rating system from Cahmeren Ostrich, and a 5/5 rating is not just entertaining or worth a reread; it's "excellent and probably psyche-changing." THIS BOOK... is excellent and probably psyche-changing. Its premise -- which checks in with the same pair of people -- (Dex and Em, Em and Dex) -- on the same day (15 July) across their twenty-year relationship -- is original, engrossing, and executed with fantastic pace. And the characters. Dear god, the characters. These are some of the 'realest,' most knowable people I have met in a book in some time. I'm pretty sure Melissa and I have relationships with these people now. We laughed with them (aloud, regularly, and not in that smart 'huHA, I see what you did there" way -- but in a sudden, spitttake sense) annnnd we cried with them (equally suddenly and with even more sputtering). Do not let the cheesy movie cover fool you, people. Do not be put off that the cover reads "bestseller" and not "winner of the requisite snooty & depressing literary prize." Read this book. And then forgive me for telling you to read this book, which -- unfortunately, at some point -- had to end. Disappointing. Although (to be fair) I had ridiculously high expectations for this book because Zevin’s first adult novel (Margarettown) is one of the best I’ve read all year (and one of my favorites, period). This YA venture has a similarly intriguing premise (a recently dead 15-year-old discovers, well, that “death is not the end”) and the mastery Zevin exhibits with magical realism in Margarettown is evident (if not as polished) here. As usual, my favorite authors tie elements of utter weirdness (Melissa will never forgive me for that kid in Lemon Cake who turns into a chair) to very real and very relatable emotions and characterization. There’s the start of that here, several times, but it’s less successful than I’d hoped. There are similar issues, apparently, in writing about someone’s entire afterlife as there are in writing about someone’s entire life. The plot is a little too broad, too disjointed, to provide the pacing of a building, driving narrative, and the characters and story arc both suffer, at times, at the expense of showing *more.* More of the world. More of the symbolism. More of the problems someone *could* face, in this place, in this situation.)

Also, y’all, there are TALKING DOGS. Which – as much as I love “Up” and as much as I can get behind a whole word of talking animals -- is just a little too twee for me about 99 times out of 100. The sentient pups also add to an off-putting sense that the book is more middle-grade than young adult, in spite of its occasional, more “adult” themes. (The third person, present-tense perspective is tough in a similar regard.)

Overall, Zevin uses her imagined afterlife as a vehicle to explore some really interesting themes -- grief, survivor’s guilt, suicidality, etc. It’s a promising premise with some of the same tools she uses very well, um, elsewhere. (<rimshot>) Like in Margarettown. Which you should read, if you haven’t, stat.
elsewhere gabrielle zevin ya young adult So many mixed feelings.

As a longtime English geek/ devourer of many "marriage plot" classics, etc, I enjoyed watching Eugenides play with those tropes. I also appreciated that he wasn't purposefully obtuse about engaging those themes. (There were several moments when I had thoughts along the lines of "oh, I see what you did there" and "this would be an easy book to write a paper on.") I felt it was a smart,interesting exploration of "the marriage plot" in contemporary culture- and (although I didn't expect to, mere pages beforehand) I thought his ending was well-played.

The big frustration for me was that I didn't actually *like* any of the main characters, with the possible exception of Mitchell. And when I say "didn't like" I don't just mean "wouldn't want to have a beer with," I mean "didn't enjoy reading about, even in a 'love to hate' or 'damn, aren't you a layered lil creature'" sense. Madeleine's sections, in particular, were largely a slog for me. Which was especially frustrating because there were minor characters (Thurston, the beekeeper, etc) that I really enjoyed. (I could have read an entire book about that lit theory class and cracked up the whole time.) But the characters who were meant to drive the narrative tended to stall it for me.

Overall: worth reading, especially for Brit lit and theology nerds, but if all I've heard of Middlesex is true, this doesn't live up to Eugenides' potential. Guess I need to read that, finally.

This was a heavier read than I expected, slower-paced than the YA texts I typically pick up and just -- a bit more dense. Rowell manages to bring in some serious real-world shit (race and masculinity, fatness and desirability, abuse and more abuse) without veering into tokenization or after-school special territory. The realness makes it a more difficult read than the beach-book romances of Sarah Dessen and crew, but it's also creates layers and roots the text more deeply in the reader. I expect these characters will stick with me for many years. Sequel to Anna Dressed in Blood.

Kendare Blake has a serious knack for writing creepy YA books that are *actually* creepy. Her pacing is especially heart-pumping in the battles and the climactic scenes, and her characters are believable (hey look! teenagers who curse with actual curse words!) and interesting throughout. There's a twist just before the climax of this novel that threw it toward 5-star territory for me, but (and I have a vague inkling I may've felt this way about Anna Dressed In Blood as well) -- the ending didn't deliver the same satisfying punch. Blake does a great job of building tension to a breaking point, but the resolution -- or for the fancy English majors among us, the dénouement -- feels a little rushed and shrug-worthy. All in all, a strong series that could have used a stronger conclusion.

(And speaking of dis-serviced strengths, *who* is that 10-year-old pixie on the cover? Because that is not Anna, people. Don't even come at me with that nonsense.) ‎#CoverFails About what you'd expect from Sarah Dessen. Well-done contemporary YA. Romantic elements between characters that don't suck.

Review: I Capture the Castle 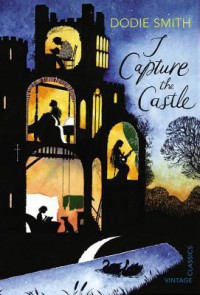 Reread this, only my second time and many years removed from the first. If possible, I loved it more this time around. The perfect tribute, not only to all the Austen and Bronte I devoured as a kid, but to the kind of kid who devours Austen and Bronte. I Capture the Castle manages to be both the escapist novel about falling in love while living in a castle -- and a more nuanced story about trying too hard to make your life into that novel. This book tied my head in knots, but somehow I enjoyed it. And want to reread it, repeatedly, so my brain might be tied in knots again.

Review: Why We Broke Up This book reads like e-mails I have written: the stream-of-consciousness run-ons of high emotion. The love and the heartbreak are equally believable; the characters are the same. I started off not loving Min, the protagonist, but she grew on me; she also grew. My favorite kind of YA romance is the kind that's more about how it changes the people involved than it is about their relationship being all perfect and adorable and fated for all time. For the most part, this book achieves that really, really well.

daniel handler why we broke up ya young adult
Tweet

Review: Anna and the French Kiss Picked this up because BookTube told me to. It was smarter, quirkier, and funnier than the design suggests. Think "Name of the Star" without the spookiness or "Why We Broke Up" re-designed to fit the Disney channel. I wouldn't reread it, but I'd read another from the author. Also: go go published NaNoWriMo novel.